Johann Joachim Winkelmann once stated that the sublimity of the Classical Antique sustains in the notion of Noble Simplicity and Quiet Grandeur. Constitutive of an era long gone, this conception still prevails in the premises of Palazzo Medici Riccardi. Standing here and marveling at some of the finest samples in sculptural achievement, one is instinctively captivated by the aesthetic spirit inherent in the relicts of Ancient Rome. On second glance however, some of these exquisitely carved muscular contractions emerge into fragments of bodily contortions. In this lies the peculiar nature of Athar Jaber’s “broken bodies,” building the first set of sculptures in his extensive body of work. Carved with exceptional technical expertise in the traditional medium of Carrara marble, Athar Jaber’s twisted corpses are deceptively classical at first sight. But their innate distortion sharply disrupts any prior indulgence in postures of pathos. 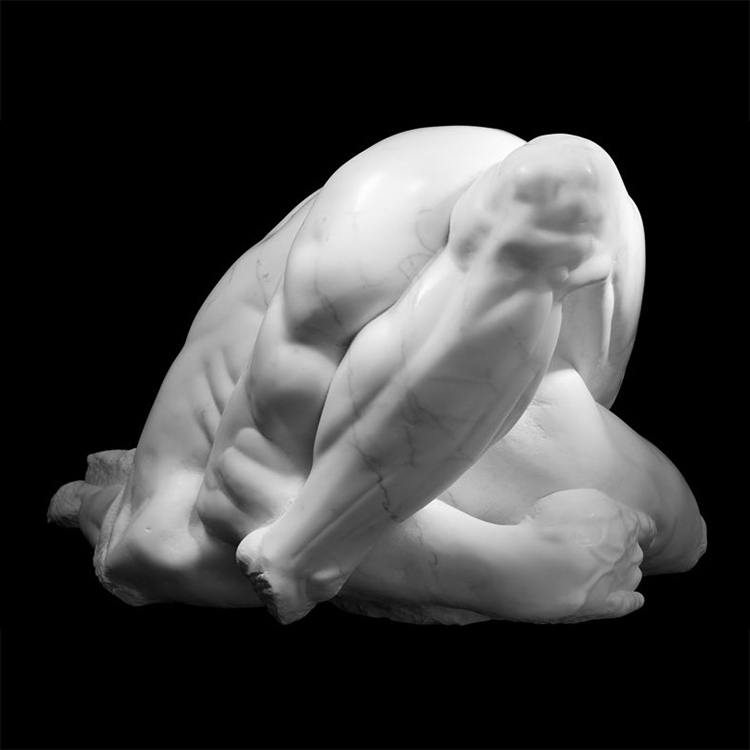 Athar Jaber entitled this sculptural series in reference to music, naming each piece Opus with an accompanying number. In classical music terms, the word opus describes a piece of work. This musical reference links well with Athar Jaber’s artistic approach: if a classification into different genres, such as classical, jazz, pop, rock, and so on would exist in the visual arts, his practice would fall under the category of contemporary classic, as Athar Jaber’s unique endeavor manifests in fusing traditional craftsmanship with a strong conceptual current. This is an outcome sourcing in and also reflecting his dual cultural identity: born to Iraqi parents, Athar Jaber grew up in Florence, where the legacy of Classical and Renaissance mastery impacted his skill-oriented practice. On the other hand, his emotional proximity to relatives in Iraq has stirred up a “second generation anxiety” by which Athar Jaber refers to a subliminal sensibility towards the general theme of war and violence. In his practice, Athar Jaber finds creative ways of incorporating this natural sentiment into expressive forms, which has lately fed into a vast scope of artistic production. But he also enriches his vision by proactively seeking a discourse with the matter of injuries, finding that life is subjected to destructive forces coming from nature and humankind alike.

For his latest series of busts, Athar Jaber collected pictures of facial deformations sourcing in different forms of violence. In transforming these traces of brutality into sculptural shapes, he aspires to tangle core emotions of empathy lost to a generation that has grown emotionally numb, thanks to extensive media coverage of war. Yet he doesn’t blame today’s condition of visual overload, nor does he condemn escapist tendencies into superficial materialism and consumptive patterns. Rather, he accepts their prevalence and creates art in contrasting response to the gleaming world, exposing a part of life inherently destructive, aggressive, but ultimately present as well. These harsh elements of existence link with the theory of entropy, which claims that everything in the universe essentially tends towards a state of disorder. This tendency is associated with the fear of destruction, chaos and death. 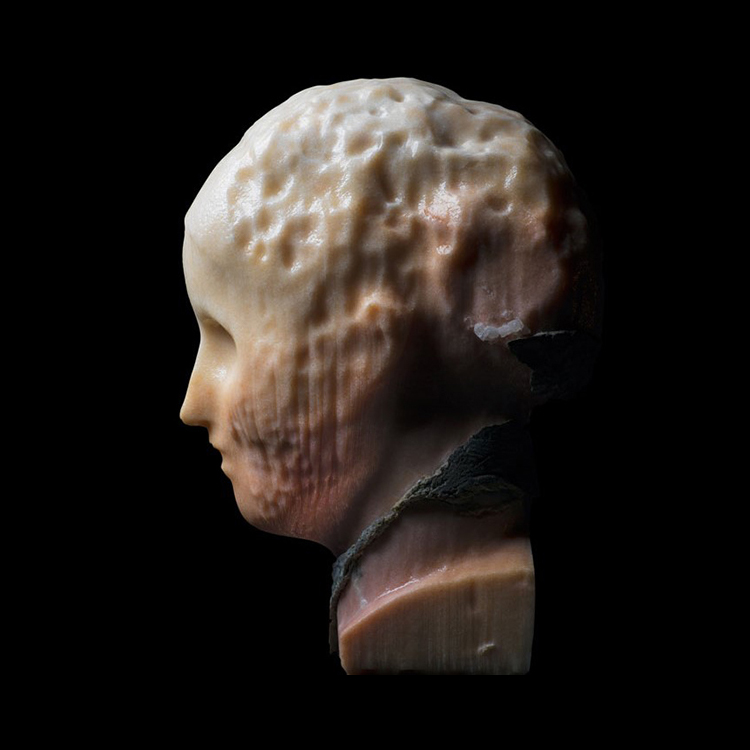 But beyond these human anxieties, Athar Jaber’s sculptures’ purely formal qualities unravel an unexpected beauty underlying the entropic force. In an interview in March 2015, Athar Jaber, quoting Marlene Dumas’ painterly interest in the pictorial, admits his devotion to shape from a sculptor’s perspective. Consequently, shape, line and texture constitute a layer of significance in Athar Jaber’s oeuvre, which at times even surpasses the interpretative meta-level. His ever-growing curiosity in the materiality of stone has led him to extend his practice and especially the notion of shaping into unconventional and highly experimental processes.

On display in Palazzo Medici, a video work documents the decomposing impact of hydrochloric acid on Athar Jaber’s previously carved busts. Deliberately exposing his sculptures to the sharp chemical substance, he replicates the corrosive reaction of stone to weather conditions and captures it in a slow motion video. Taking the notion of aggressive attack into even more explicit dimensions, Athar Jaber has entered a collaboration with the Department of Weapon Systems and Ballistic of the Belgian Military Academy, allowing him to shoot his sculptures with military devices. Yet once again, the actual bullet mark is of particular interest to Jaber, as in how it discloses the fragility of stone. His undertaking undeniably evokes memories of the recent strife in the Middle East. Athar Jaber created his deconstructive works coincidentally at the same time as the systematical destruction of cultural heritage in Northern Iraq was conducted. Also, his acid-etched busts bear a strong visual resemblance to actual chemical burns inflicted on women. Athar Jaber’s art relates back to the violent condition of the world, which leads him to question how to proceed with his destructive experimentation in light of the barbaric reality. His decision to keep creating art in an act of resistance brings to mind George Bataille’s claim that “art is born out of a wound that does not heal.” And it is precisely this conceptual breech that infuses Athar Jaber’s art with contemporaneity and places it amongst the relevant artistic productions of our times. 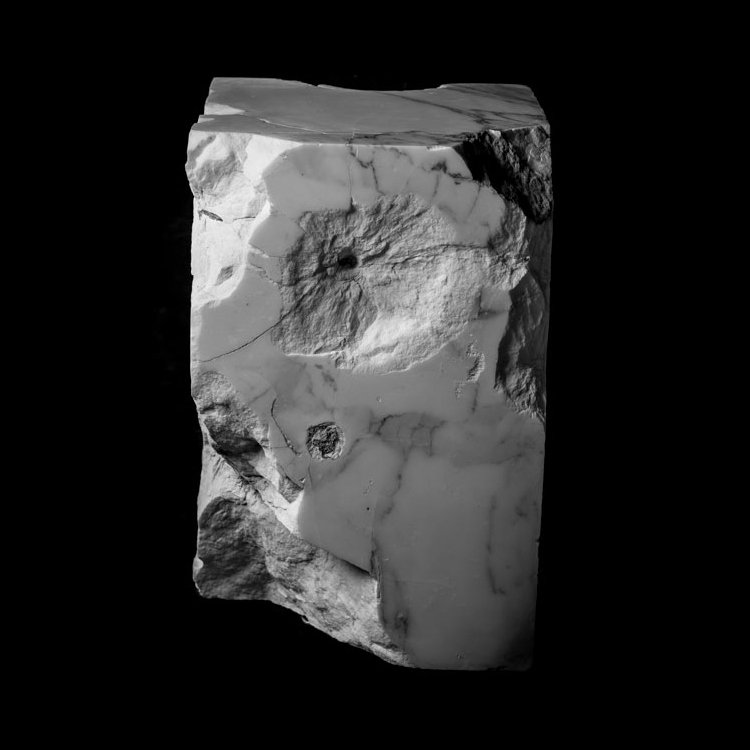 Athar Jaber’s vast exploration of the sculptural medium concludes with a third, utterly distinct strand of works. Like seemingly pre-historical remnants, blocks of vertically carved chisel marks hang from the walls and provoke a striking contrast to the other exhibits. These plates demonstrate an early carving technique also referred to as Frijnen in the Flemish region, which originally derived from the brick working industry. Athar Jaber appropriated this method into his practice, as it is fundamental for the craftsmanship in both a historical, but also technical sense. While Athar Jaber teaches this technique as a basic step in his sculpting class at the Royal Academy of Fine Arts of Antwerp, it is considered fairly difficult to achieve actual mastery in this practice. But while this method challenges concentration and accuracy to a great extent, tapping the chisel in rhythmical movements also allows the sculptor to immerse in a meditative exercise. In Athar Jaber’s case, this contemplative act immensely contributes to counterbalancing his extensive preoccupation with war and violence.