A chaos, a Crisis, Leading to New Harmony

In order to understand the intimate relationship between Athar Jaber’s art and his life, one has to deal with fascinating and numerous opposites: a profound mixture of energy and fragility, enthusiasm and pain, in which the sculpture becomes a mirror that reflects it Space in constant evolution that is undeniable and wondrous evidence of life itself.

Jaber was born in Rome to Iraqi parents and grew up between Rome, Florence and the Netherlands. He currently lives and works as an artist in Antwerp, Belgium, where he holds the position of Associate Professor of Sculpture at the Royal Academy of Fine Arts. He has realized many solo exhibitions and participated in exhibitions all over the world; his works can be found in private and public collections such as the Barjeel Art Foundation, the Palestinian Museum, the National Museum of Fine Arts of Havana and the FAO headquarters in Rome.

Growing up with images of the Gulf War, his expressive impulse could not avoid dealing with subjects such as suffering and violence. At the same time, through his life in the Italian city, which is regarded as the cradle of art, he developed a deep understanding of sculpture in the classical sense and a continuous inner tension in the search for ideal beauty.

The point at which these two scenarios meet is the origin of the intensity of Jaber’s language, which constantly thinks ahead, to a reflection that harmonizes the permanent and somehow makes it seem ephemeral, towards the fleeting, the constant, the Mutable and to the end. His research outlines a dynamic horizon whose extremes attract and live in a togetherness that constantly nurtures and expresses his understanding and artistic work and is completed in a great technique and a penetrating lyrical timbre.

“In my opinion, beauty is not a question of aesthetics, but of ideology and context. In music, a dissonance can sound beautiful when presented in the right context. It is not pleasant to the ear, but it faithfully reflects an aspect of reality or certain concepts. Dissonance is the interruption, the disruption, the deformation of the status quo. The emergence of the alien in an otherwise ordered system. A chaos, a crisis, the end of which leads to new harmony. This is not a break, but the two sides of a coin. Although I acknowledge this uncomfortable truth, my intention is not to change it – which would mean to deny the facts – but to present it faithfully. ” 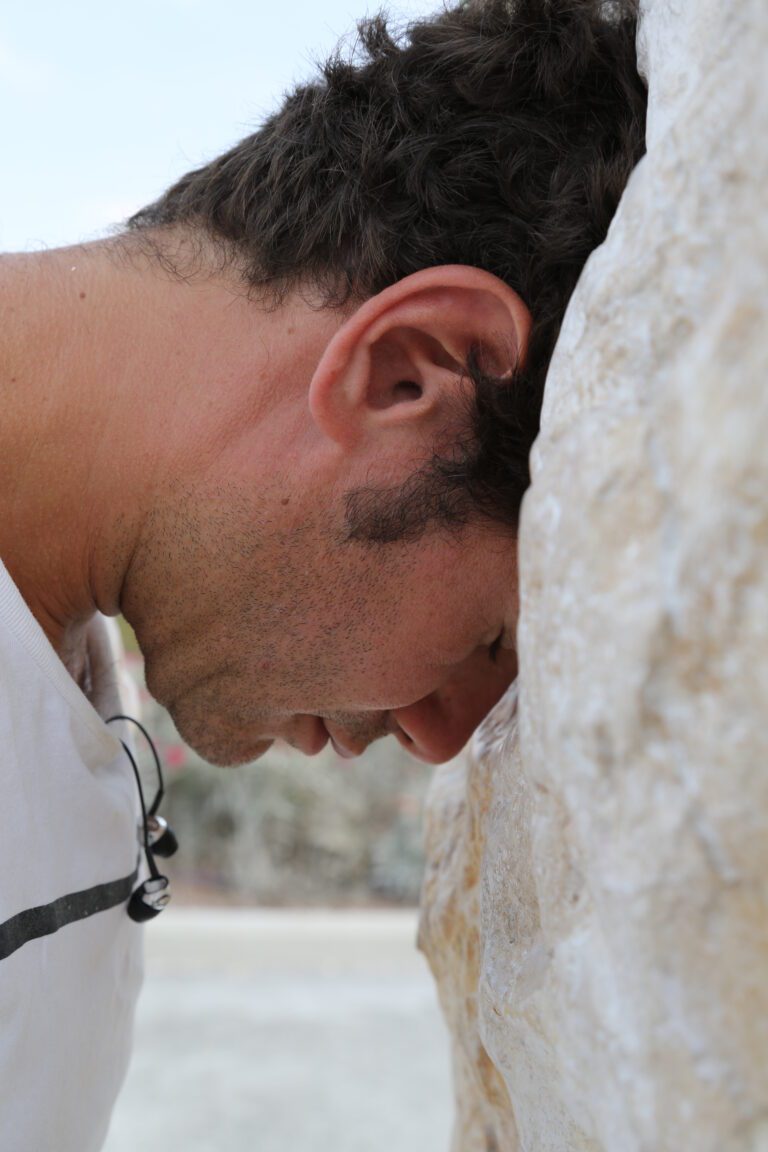 How do these opposites reconcile? I would like to respond with the latest project called “Friendly fire / collateral damage” that Jaber is working on: he plans to create four monumental stone sculptures in collaboration with the Military Academy and the Belgian Ministry of Defense. The idea is to use unconventional methods such as the use of ballistic technology, firearms and explosives to transform marble blocks into sculptures in the training facilities of the Belgian Ministry of Defense. After their completion, the sculptures will be exhibited in various international museums and then sold to public institutions or private collectors via an art gallery or an international auction. The proceeds will be used to fund the restoration of the cultural heritage damaged or destroyed by terrorist organizations during the recent conflicts in the Middle East.

Jaber always had to deal with a sense of belonging while developing his thoughts,that transcends geographic boundaries. A concept that has become the framework for his research and with which he would like to outline many years of common human experience and different cultures. We are crossed by many borders, and even if these are not only in one area, they nonetheless form our everyday life: discrimination that we are exposed to, borders that we cannot overcome, doors that close. Some of them who cross war zones are very violent. Others, those of migration, reflect an escape or a rejection, and here too there is violence. Still others are cultural boundaries that simply separate a part of us.

“Paradoxically, borders were man-made and invented for the purpose of pursuing a policy based on belonging to a tribe, society or nation. Even if we live in a relatively tolerant world that is open to dialogue, it is important to realize that this need to belong to a particular tribe is still very relevant. And it forms the basis for the ubiquitous violence. I’m not just referring to physical violence, which is just a consequence of another, much more dangerous and invisible violence: the systematic and structural violence that dominates most social dynamics. “

The artistic work that enables Jaber to dissolve the boundaries and thus reduce the distance between inside and outside is manifested in a poetic act that favors the territory of the never-ending and is understood as a burden on the infinite, to the detriment of the strict Form that is a legacy of the making of art history. Many of his works are reminiscent of the Japanese concept of Wabi-Sabi: the art of seeing beauty in imperfection, or rather the impulse to perfection that pervades the cult of imperfection.In the mutilated faces, the distorted, violated and destroyed integrity of the human body, the missing body parts, in the half-full, cornerstone of the aesthetics of a work that allows for interpretation. An invitation to imagine the uncertainties of life, to dream about them, or to accept them. The hopelessness of defining the reality that there are no rules for it. Even if he works with the stylistic features of classical art, his art says nothing about the Renaissance man, the man at the center of the cosmos, the measure for everything. He represents a modern person, on course with balance and stable order, lost in the middle of a universe that is always moving and never the same.

An unfinished sense of becoming, which is also a conscious decision not to want to fully define certain characters or concepts. Since there is no pretext of uniqueness and absolute truth, one can see that Jaber tries in his works to free the structure from the dogma of form. His work seems to be more an expression of doubt than an affirmation of perfect form. Perhaps they can be seen as a metaphor for the impermanence of reality. Fascinated by Derrida’s deconstructivism, which aims to highlight waste, emptiness, breaks and discontinuity, his sculptures immediately appear in a dimension that leaves an exegesis open. The Aporia is omnipresent: It is impossible to give an exact answer to a problem because all the solutions, even if they are contradictory, apply equally. In this sense, there are as many interpretations of a work as there are people who look at it, recognize themselves in the work, and use it as a means of reinforcing their personal experiences.